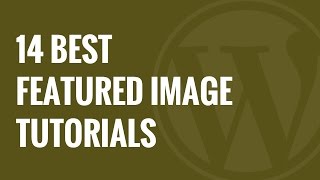 Featured images play an important role in most WordPress themes. There are plenty of things you are able to do with featured images. In this video, we will show you 14 of the best featured image plugins and tutorials.

If you liked this video, then please Like and consider subscribing to our channel for more WordPress videos.

Text version of this tutorial:
http://www.wpbeginner.com/plugins/14-best-featured-images-plugin-and-tools-for-wordpress/

Join our circle on Google+:
https://plus.google.com/+wpbeginner/

Summary of this Tutorial:

It will automatically get the featured image from your article and use is as a slide with your post title and excerpt.

You can also set a default image to be use as featured or use the first image in the post as the featured image.

#3 is multiple post thumbnails which allows you to add multiple featured images to your WordPress posts.

This plugins stops anyone from publishing a post without a featured image.

#7 is easy add thumbnail which will setup the first image in a post as the featured image.

This is great for older posts with no featured image set as it will automatically set it for you as long as there is an image in the post.

#8 is video thumbnails is great if you have a site full of videos. this plugin will look to see if a post has a YouTube, Vimeo or DailyMotion video and automatically sets the video thumbnail as the featured image.

#10 is post thumbnail editor and it allows you to edit images inside WordPress. Then you can use the cropped image as the featured image.

Just add this code and make sure you add the category images to this folder with this file name structure.

#13 is the post thumbnails in WordPress rss feeds will add thumbnails to your rss feeds. just add the code to your functions page.

#14 is regenerate thumbnails. this plugin works great if you update your theme, you old image dimensions might be skewed. using this plugin generates new image sizes in WordPress to make your images match the theme.

Links to all of these can be found at: