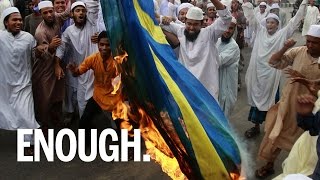 Sweden is set to deport 80,000 migrants, or immigrants, who have applied for VISAS that have been rejected. This number is a little more or less than half of the total number of people that have been taken in recently, overall. It’s also a number that makes Sweden the highest per-capita in accepting refugees from Muslim countries in recent times. This en masse importation of “refugees” is not without consequence.

From the beginning of their humanitarian efforts to accept war refugees, they have been inundated with many people who wish to simply leech off of the state and cause harm to the native people. There has been a skyrocket in the amount of reported rapes. Petty theft, assault, general discontent and a lack of social cohesion is happening. Many common citizens feel like they are not being treated fairly by politicians who allow refugees, migrants, immigrants, to flood their towns and cities without much restraint.

As is the story in Germany where a 16 year old young girl recently made a plea on her Facebook page that has gone viral. She spoke about being harassed by North African Arab Muslims for simply wearing a t-shirt. They called her a whore and glared at her as if she was inhuman. She said that the men of Germany, and other European countries such as Sweden, France, UK, and more, all need to step up and protect their women and children. She expressed contempt for Angela Merkel and her lack of action to remedy the pressing issue.

Apparently, Sweden has listened to this young girl and many other people. They are cracking down on immigration from the third world, and it’s about time.

Sweden sends sharp signal with plan to expel up to 80,000 asylum seekers
http://www.theguardian.com/world/2016/jan/28/sweden-to-expel-up-to-80000-rejected-asylum-seekers